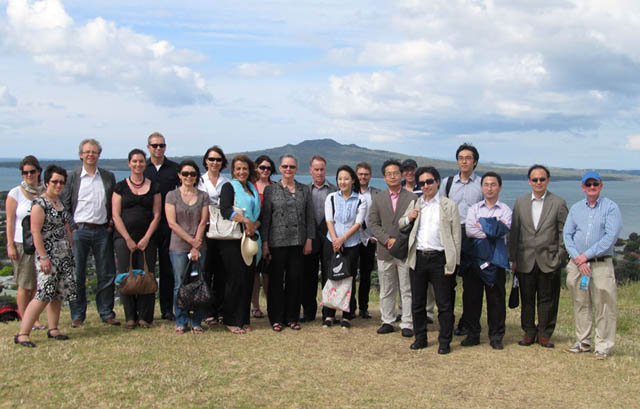 APPA members taking in the views of Auckland from Mt Victoria

The 34th Asia Pacific Privacy Authorities (APPA) forum was hosted by the New Zealand Privacy Commissioner in Auckland, on 7-8 December 2010.

Participants discussed a wide range of matters over the two days of meeting. Selected highlights follow.

The meeting welcomed the Federal Trade Commission, United States, the Federal Institute for Access to Information and Data Protection, Mexico, and the Office of the Information Commissioner, Queensland, as new members.

Members adopted a new Statement of Objectives that highlights the importance of cross-border enforcement cooperation and recognises a strengthened relationship between APPA and the APEC CPEA.

The meeting agreed to develop a survey that APPA members may conduct during PAW. The survey will allow comparable data to be gathered across the jurisdictions for the first time. The Communications Working Group will work on proposals and circulate amongst members for approval.

The meeting discussed the wide range of activity in international forums such as the ICDPPC, OECD, APEC, CPEA and GPEN. Mexico, as host of the 33rd ICDPPC, updated delegates on plans for the next International Conference to be held in late 2011. The Administrators of the APEC CPEA gave a report on a CPEA Participants meeting held in conjunction with the APPA forum.

A discussion followed on the prioritisation of cross-border enforcement action and examined scope for further cooperative work in conjunction with CPEA.

Members explored developments in direct marketing such as the recent Hong Kong investigation of the release of information for marketing by a company operating a smartcard payment system. The practice in some economies of pre-screening marketing lists by using credit reporting systems was also discussed.

The meeting heard from Mozelle Thompson, former US Federal Trade Commissioner and now Policy Consultant to Facebook, about the ways in which privacy regulators might most effectively engage with multi-national companies. Mr Thompson joined a subsequent discussion on the use of social media by privacy regulators and the issues arising with privacy law.

The Forum received a briefing from the FTC on the substantial work being undertaken in the Privacy Roundtable’s Project to re-examine the current approaches to privacy protection in the USA.

The APPA Technology Working Group provided an update. Work has commenced in the compilation of a database of material for members to enhance the sharing of information across jurisdictions.

The meeting explored the advantages and drawbacks of publicly naming organisations that are found to have breached privacy laws as a means of influencing organisation behaviour and encouraging systemic change.

The next meeting of the Forum will be held in Seoul, South Korea in June 2011.

Representatives from the following organisations joined part of the meeting as observers: