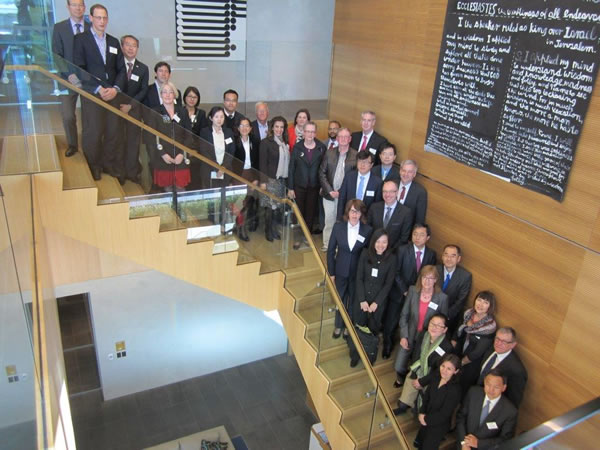 APPA members at the 39th APPA forum, Auckland. The painting to the right of the group is by Colin McCahon. The work is described at the Colin McCahon Online Catalogue.

The 39th Asia Pacific Privacy Authorities (APPA) Forum was hosted by the New Zealand Privacy Commissioner in Auckland on 15-16 July 2013. The meeting was attended by the most diverse range of APPA economies so far.

The meeting announced two new members. The Superintendence of Industry and Commerce, Columbia, and the National Authority for Data Protection, Peru, are APPA’s first members from South America.  APPA now has 16 members, five of which are from the Americas.

The first day involved only APPA member authorities and a few observers, principally other privacy enforcement authorities.  Discussions focused on sharing knowledge and resources, and fostering cooperation, on issues common to authorities and relevant to emerging threats. Reports were received from working groups in communications and technology.  The Forum also discussed options for placing APPA on a strong financial footing taking into account the burdens placed on the Secretariat and hosts by larger meetings.

On the second day, the forum was additionally attended by government officials from various economies.  In the late afternoon, invited participants from business and civil society joined the meeting.

The meeting discussed developments in each of the jurisdictions represented and received updates on global developments in APEC, OECD and EU as well as in various forums such as the International Conference on Data Protection and Privacy Commissioners, and the Global Privacy Enforcement Network.

The Forum devoted a major session to discussing children’s privacy which included presentations on predictive risk modelling and on aspects of the New Zealand Government’s Children’s Action Plan.

Other sessions throughout the afternoon touched upon a variety of topics such as privacy impact assessment, the data brokerage industry, the potential for interoperability between Europe and APEC’s privacy rules and received presentations on corporate issues.

The meeting acknowledged the leadership of particular individuals in member authorities and marked some of retirements and appointments.  Since the last meeting, the Forum noted that:

The meeting offered its best wishes for outgoing commissioners and welcomed the new ones.

The 40th meeting will be hosted by the Office of the Australian Information Commission in Sydney in late 2013.

The following member authorities participated in the meeting:

Officials from the following economies attended both days of the meeting as observers:

Officials from the following economies attended Day 2 of the meeting as observers:

As part of APPA’s outreach beyond government circles, the last part of the meeting was joined by 9 observers from industry and civil society.