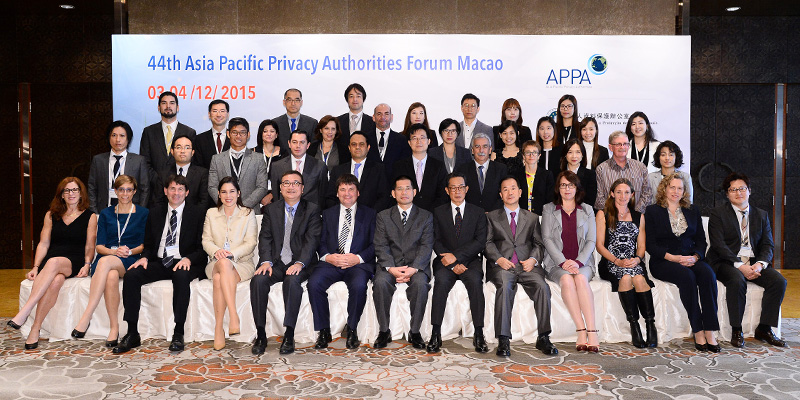 The 44th Asia Pacific Privacy Authorities (APPA) Forum was hosted by the Office for Personal Data Protection, Macao on 3–4 December 2015. The meeting was attended by a broad range of APPA members (see below for a complete list of APPA attendees and observers).

Delegates discussed a variety of current issues over two days. Some of these have been highlighted below.

The first day of the Forum was limited to APPA member authorities and invited observers. Members presented their jurisdiction reports and discussed  emerging issues from across the Asia Pacific region, including legal reforms and law enforcement issues, transparency reporting, health information and biometrics, and various public education initiatives. Members also shared a wealth of opinions on investigations and data breaches.

Building on discussions from the 43rd APPA Forum, members continued to discuss APPA’s future direction, including APPA’s governance framework and the future and role of the APPA Secretariat. Members thanked the Office of the Australian Information Commissioner for its commendable efforts during the past nine years as the Secretariat. The Office of the Information and Privacy Commissioner for British Columbia was nominated to be the next APPA Secretariat. Members also agreed to establish a governance committee.

APPA members approved ‘Privacy in Your Hands’ as the theme for next year’s APPA Privacy Awareness Week (PAW). PAW will be held in May 2016.

During the closed session on day two, members discussed recent developments relating to the:

Members further discussed the implications of big data for data protection authorities, and how authorities are responding to big data issues in their own jurisdictions. In addition, attendees discussed the US-EU Safe Harbor Agreement, harmful digital communications, privacy trust marks and certifications, and compliance techniques for privacy enforcement authorities.

The second half of day two was an open session. This was attended by government officials, private sector representatives and academics. During this session, several privacy issues were discussed, ranging from the installation of CCTV cameras by public security forces, to cyber status and privacy concerns, and measuring stakeholder attitudes and satisfaction.

The 45th APPA Forum will be hosted by the Personal Data Protection Commission, Singapore in July 2016.

The 46th APPA Forum will be hosted by the National Institute for Transparency, Access to Information and Personal Data Protection, Mexico in November or December 2016.

Officials from the following government organisations attended the meeting as observers: