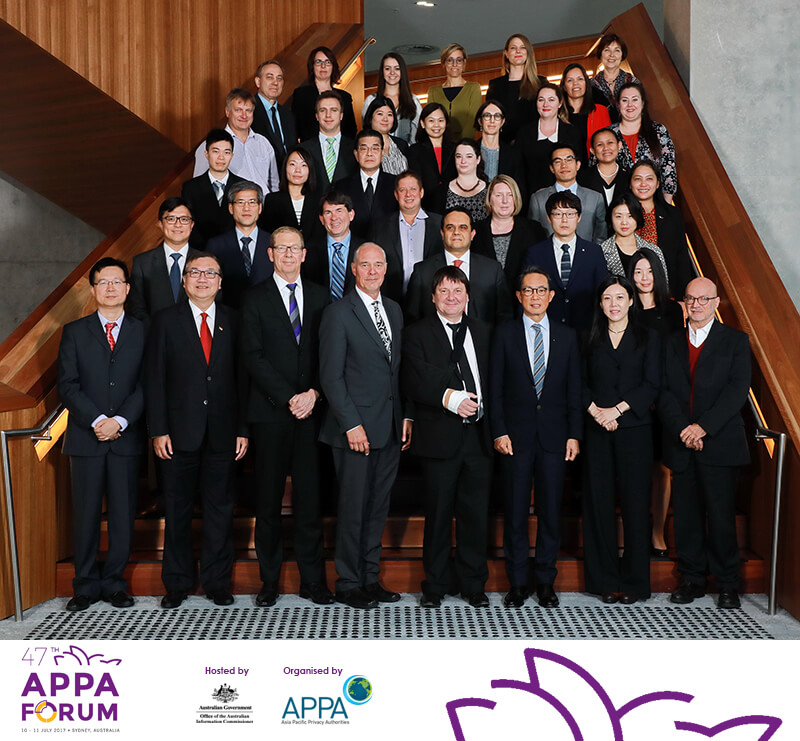 The Office of the Australian Information Commissioner (OAIC) hosted the 47th Asia Pacific Privacy Authorities (APPA) Forum on 10 to 11 July 2017 in Sydney, Australia.

APPA members and invited guests spent the two days discussing interoperability and identifying global and domestic synergies for regulatory guidance and enforcement activities in the Asia Pacific. Highlights from the 47th APPA Forum are detailed below.

The Forum was organised with the support of the APPA Governance Committee, which is comprised of five APPA members.

The APPA Governance Committee provided an update and presented the policy on APPA Forum attendance and the protocol for publishing or sharing APPA reports without any objection from members.

APPA’s Communications Working Group (CWG) provided a summary of the initiatives and campaigns for 2017’s Privacy Awareness Week (PAW). In 2017, 11 APPA members participated in PAW to promote two themes: Share with Care and Trust and Transparency. The CWG encouraged all members to participate in PAW 2018 to enhance international awareness.

The Technology Working Group (TWG) updated APPA members on the International Repository Report and encouraged suggestions for future research topics. The TWG also invited APPA members to provide feedback on the adoption of the ‘Payment card industry —Data Security Standard’ as recommended at the last Forum.

Following the TWG report, members received an update from the Comparative Privacy Statistic Working Group (CPSWG). The CPSWG was reactivated in 2017 and chaired by the Office of the Privacy Commissioner, New Zealand. The group briefed members on its goals, objectives and work plan for the coming year. The aim of the CPSWG is to create a reliable statistical baseline for privacy law and regulator awareness across APPA jurisdictions.

The Office of the Privacy Commissioner of Canada (OPC) updated members on other networks’ activities including the Global Privacy Enforcement Network’s (GPEN) Investigator’s Conference and the Digital Clearinghouse initiative. The United States’ Federal Trade Commission joined OPC reporting on their survey of technological research and support capacity within and amongst APPA members. A discussion followed on how to move this forward for the next APPA Forum.

The day concluded with the traditional group photo.

The morning of the second day began with a video presentation from Brown University Adjunct Professor and Associate Faculty Director, Deborah Hurley. Ms Hurley presented a paper by the Executive Master in Cybersecurity Class of 2018 which discussed identifying the most promising methods for technically de-identifying data and explored the relative merits of these emerging techniques.

The Forum engaged in a wide ranging discussion regarding the presentation — recognising the complexity of the issue. The TWG agreed to assess current de-identification guidance undertaken by APPA members to identify common principles and approaches, and also to explore international standards in this field. The TWG will present back to the 48th Forum.

Other topics discussed by members were accountability tools and the EU General Data Protection Regulation (GDPR). The sessions provided members with an update on a recent GDPR workshop for APPA members in Paris, how the UK is preparing for the commencement of the scheme and an update on available resources for Asia Pacific jurisdictions.

The broader session included guest speaker, Simon Entwisle, Deputy Commissioner (Operations) at the Information Commissioner’s Office UK, who presented on big data, artificial intelligence, machine learning and data protection. The discussion was opened up to members to voice developments in their jurisdictions and brought to light opportunities to collaborate.

The results of the OAIC’s 2017 Australian Community Attitudes to Privacy Survey mentioned in the CPSWG update were expanded on during day two. The results highlighted that Australians were concerned about their privacy however they were not maximising the options available to them to protect themselves. The key findings showed that both consumers and businesses need to work together to ensure personal information is protected.

The broader session continued with a regulatory panel discussion from members who have implemented or are preparing to implement notifiable data breach notification schemes and what they have learnt from the experience. Members were also provided with an overview of the Asian Business Law Institute.

To conclude the Forum, an update on the 48th APPA Forum which will be held in Vancouver, Canada, was presented to members.

The meeting recognised the following appointments and departures in member authorities since the last meeting:

The 48th APPA Forum will be hosted by the Office of the Privacy Commissioner of Canada from 15 to 17 November 2017 in Vancouver, Canada.

The host of the 49th APPA Forum will be announced shortly.

Officials from the following member authorities participated in the meeting:

Officials from the following organizations attended the meeting as invited speakers: