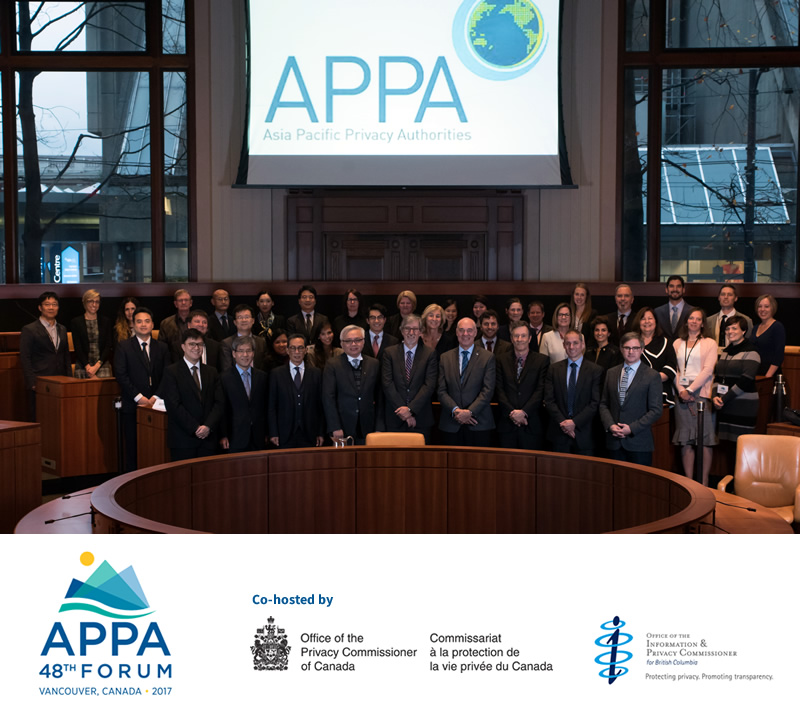 The Office of the Privacy Commissioner of Canada (OPC-Canada) and the Office of the Information and Privacy Commissioner for British Columbia (OIPC-BC) co-hosted the 48th Asia Pacific Privacy Authorities (APPA) Forum on 16 to 17 November 2017 in Vancouver, Canada. A kick-off event was also organized on 15 November, highlighting the benefits of independent research in privacy, while showcasing results of the OPC-Canada’s Contribution Program.

Over the three days, APPA members and invited guests shared insight and perspectives under the theme of Partnering for Research, discussed global privacy trends, exchanged domestic experiences and sought opportunities for joint regulatory guidance and enforcement activities across the Asia Pacific Region.

The Forum was organized with the support of the five-member APPA Governance Committee and was attended by fourteen (14) APPA member authorities.

The kickoff event featured past funding recipients under the OPC’s Contributions Program, which funds independent research projects and knowledge translation initiatives in the field of privacy. The event noted the importance of funding programs that help advance the cause of privacy in Canada and internationally.

The kickoff event started with a screening of four video clips produced by Option consommateurs, a consumer protection association from Québec. The video clips were realised with funding assistance from the OPC and featured past funding recipients under the Office’s Contributions Program, who summarized in the clips their research and attendant findings. There followed a panel discussion, with speakers all of whom were also recent funding recipients under the Contributions Program.

The documentary “Datamining the Deceased” was then presented to APPA members and invited guests. This one-hour documentary, also produced in part with funding from the OPC’s Contributions Program, explores the industry behind the exponential growth of genealogy, and its potential impact on privacy.

Day one (broader and closed session)

Opening remarks were delivered by the co-hosts, Daniel Therrien, Privacy Commissioner of Canada, and Drew McArthur, Acting Information and Privacy Commissioner for British Columbia. In their remarks the Commissioners lauded the importance of Asia-Pacific privacy authorities continuing to work together in practical and pragmatic ways towards greater interoperability.

The remarks were followed by four panels. The first panel convened speakers from four of the world’s largest data technology companies – Apple, Facebook, Google and Microsoft. The panelists shared their experiences on how their respective organisations integrate privacy in technological development and what mechanisms they have in place to facilitate global privacy compliance and to enhance consumer trust.

The second panel considered the innovative ways in which privacy authorities can partner with small and medium enterprises to more effectively meet privacy and business goals. Panelists shared experiences informed by their different perspectives – as regulators and small business representatives – and sought common strategies that can help privacy practices by all organisations.

The day’s third panel followed-up on the OPC-Canada’s recently completed consultations and Report on Consent. The panelists discussed potential solutions for enhancing the role of consent in privacy protection and, while recognizing consent remains an important pillar for the collection, use and disclosure of personal information, discussed where other alternatives can complement consent.

The fourth panel was a practical discussion on how data protection authorities can support and partner with outside research to inform and compliment their regulatory and enforcement work. Panelists shared their experiences both in setting up independent research funding programs and as recipients of grants. The discussion noted the importance of collaboration between academia, civil society and regulators, as well as the benefit this research has at the practical level, including for organisations that can implement research findings in their everyday work.

The APPA Forum continued with a closed session during which privacy authorities from Europe and Washington State provided updates on the implementation of Europe’s General Data Protection Regulation (GDPR) and on state-level privacy practices in the United States, respectively. Members also held a discussion on the consultation via regional networks that the International Conference on Data Protection and Privacy Commissioners (ICDPPC) is conducting.

The morning of the second day began with the presentation of members’ jurisdiction reports and their common themes. These themes included compliance and enforcement; cross-border data flows; law reform; outreach and education; and, business innovation.

APPA members then shared global privacy updates and developments. These included reports on the Asia-Pacific Economic Cooperation forum’s recent meeting in Vietnam, on the outcomes of the 39th ICDPPC hosted by Hong Kong, and on the Global Privacy Enforcement Network’s initiatives, including its recently concluded Sweep.

The APPA Governance Committee provided its update and presented the findings of their survey on the funding agreement. The Communications Working Group tabled its report, including initial findings from its survey on the synergies between of APPA members’ privacy legislation and the GDPR. The Technology Working Group presented its discussion paper on de-identification, following up on the survey it conducted during the 45th APPA Forum on the same topic. The Working Group on Comparative Privacy Statistics also tabled its report on recent activities, including its study of how APPA member authorities compare to the wider global community of privacy and data protection authorities as derived from the census conducted by the ICDPPC earlier this year.

The day concluded with the unveiling of the host of the 49th APPA Forum: the United States Federal Trade Commission.

The meeting recognised the following appointments and departures in member authorities:

The 49th APPA Forum will be hosted by the United States Federal Trade Commission in San Francisco, California.

The host of the 50th APPA Forum will be the Office of the Privacy Commissioner, New Zealand.